An offline campus of Xiaoyinka, a music training company, in Shanghai.

Xiaoyinka, or Little Musician, a music training company, faces music, with employees and teachers complaining of not being paid for nearly four months and parents of students demanding refunds due to incapacity to keep its promises of service.

The company, owned by Shanghai Yiqilai Culture Communication Co, was popular for providing one-on-one training for children aged 4 to 12 on musical instruments such as piano, violin and Guzheng (Chinese zither).

Unlike traditional training organizations, where parents send their children to class, students at Xiaoyinka can take lessons in its classrooms or in teachers’ studios or homes, or invite teachers to come and teach at home.

Tuition fees are paid to the company, with teachers being paid based on the number of classes they take in a month.

Gu Liqin, mother of a 10-year-old girl, said she heard about the primary school after she handed out a questionnaire in May last year about parents’ interest in their children learn a musical instrument.

“I said ‘Yes’ and a salesman from Xiaoyinka called me and arranged a demonstration class for my daughter in August,” Gu recalls.

“I decided to pay so much because it came to us through the school and the company said it was funded by a state-owned company under the Shanghai Youth League,” Gu explained. “And also, I thought it would push my daughter to keep learning. She had tried to learn piano and guitar earlier, but gave up immediately after completing short courses.”

Gu had another reason for choosing Xiaoyinka. She found a teacher who lived in their community and whom her daughter liked.

In addition, at the end of last year, Xiaoyinka said that she signed an agreement with the Bank of Shanghai to set up a special account for the supervision of student tuition fees, which made her more confident in the government. company. 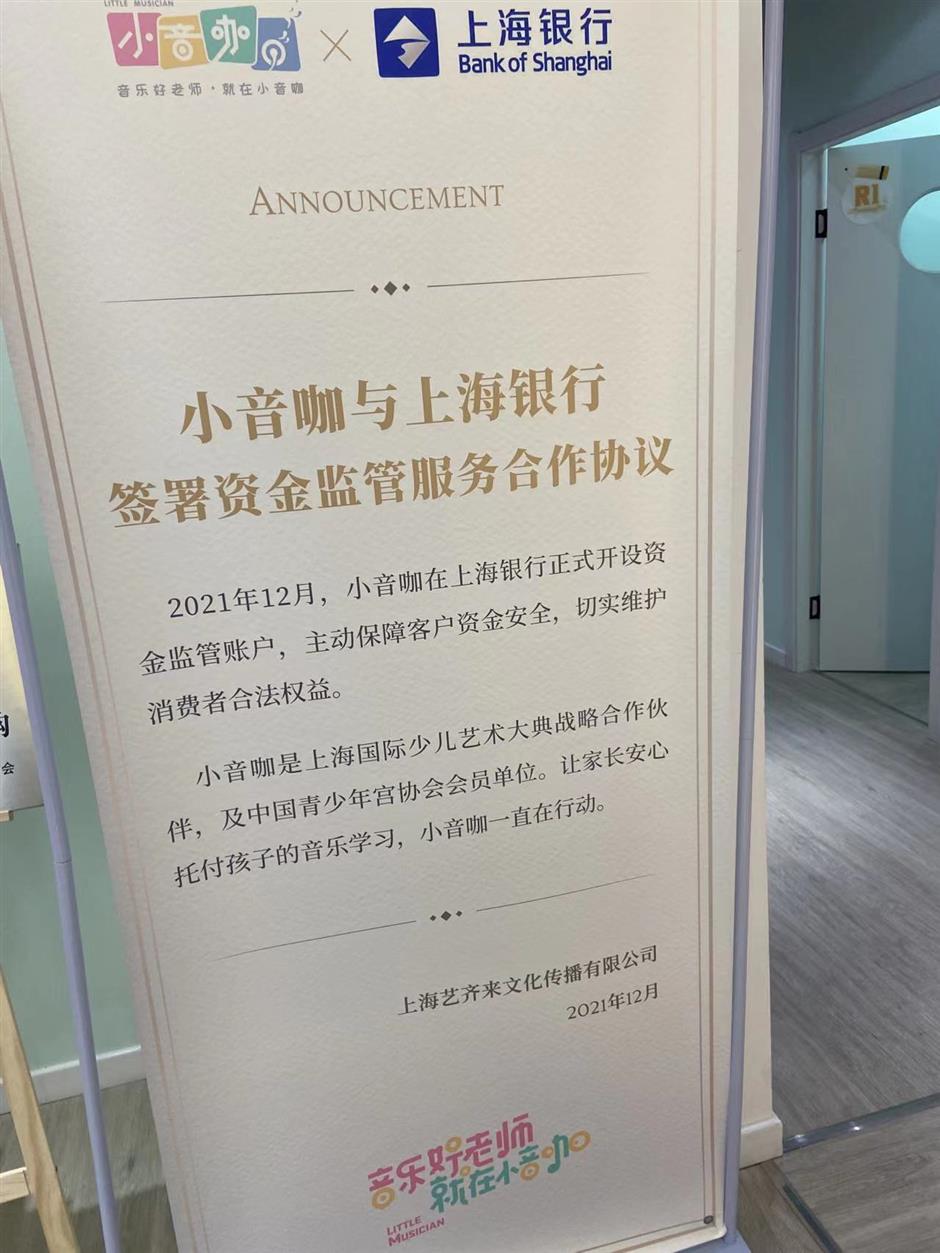 Xiaoyinka put up a poster of her agreement with Bank of Shanghai on supervising funds at her outlet.

“Everything was perfect at first, and even after the company had to suspend offline classes due to the COVID-19 pandemic, the teacher continued to teach online,” Gu said.

“But in April the teacher told me she had to stop teaching because the company hadn’t paid her for two months.”

She contacted the salesperson and assistant who had helped organize the lessons, and was told that the teachers were not being paid because the finance staff could not return to the office due to the confinement.

“I trusted them because of the situation in the whole city at the time and I personally paid the teacher so that the lessons could continue for my daughter. She will take a marking test this summer,” said revealed Gu.

But later, with the seller and the assistant being out of touch, Gu joined some WeChat groups of parents with similar issues.

She noted that some of the parents had requested a refund but to no avail while others had checked with the Bank of Shanghai and found that the account announced earlier had not yet been created.

“We are concerned and some have filed complaints with various government platforms, including the city’s 12345 hotline,” Gu said. “Some parents have reported the case to the police and I will go too. I really don’t know how else to solve the problem.”

Qiao Xue, a class assistant at Xiaoyinka, said the company has about 50,000 students in Shanghai and is busy responding to parents’ inquiries and responding to their accusations and denunciations.

“Some of them paid 20,000 yuan, some 100,000 yuan, and most paid about 50,000 yuan. But I can’t do anything for them,” she insisted. “I haven’t been paid for three months. My supervisor let us know that the company would lay off most of the employees and only retain 30 teachers and asked us to look for new jobs.

“It’s impossible for me because I’m five months pregnant. The company has also stopped paying my social security contributions, so I’m afraid I’ll be able to collect childbirth allowance after giving birth.”

On June 10, the company launched two helplines for teachers and parents, but many said their calls went unanswered.

Li Ai, founder of Xiaoyinka, issued an open letter to all teachers and parents on Monday, acknowledging that the company was facing cash flow difficulties, but promised it would not give up.

Stating that the company is actively seeking new financial backers to continue its operations, she revealed that a detailed “rescue plan” will be published on Friday, calling on teachers to teach classes on a “reduced salary” while the rest and those previously due will be paid progressively in the future.

But his explanation failed to assuage the worries of parents and employees, especially when they found out that Xiaoyinka’s Guangzhou branch announced the suspension of operations on the same day. 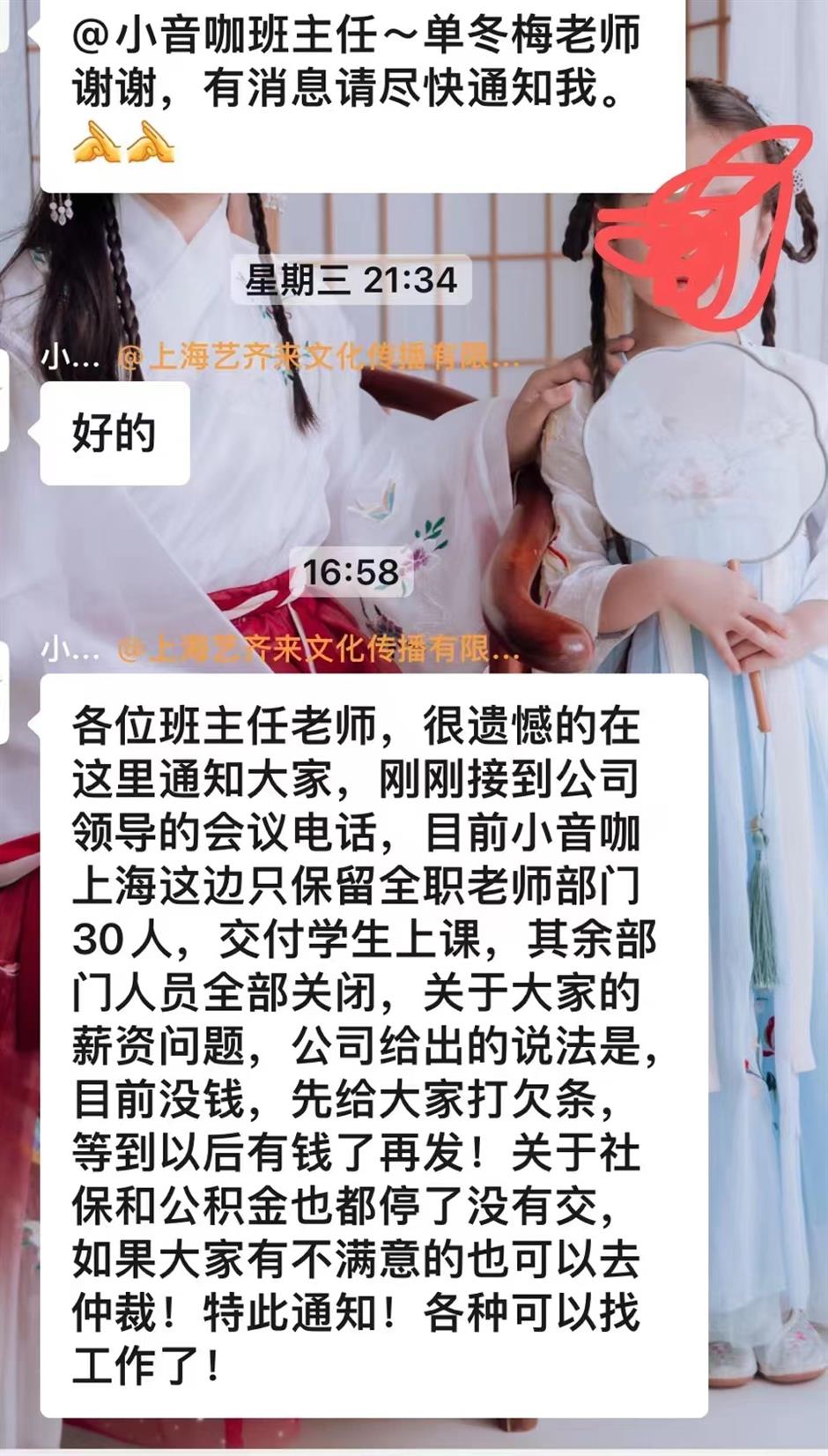 A screenshot from the WeChat group shows a message that the company would lay off most of its employees.

Yuki Li, a Guzheng teacher under contract with the company, said she messaged a company administrator via WeChat asking him to join the plan and continue teaching his students, but got no response.

The teacher mentioned that she received an invitation from Xiaoyinka to use her platform about three years ago.

“I have a studio to teach children to play Guzheng but I found it difficult to recruit students on my own, so I agreed to subscribe to the company’s service,” she said. “We cooperated well but since March it has delayed my payment again and again with excuses, including the lock. And even after the lockdown was lifted, he still hasn’t paid me.”

Parents and teachers have also found that the company pays teachers more while charging parents less, raising suspicions about the company’s sustainability.

“Even after our boss released the letter, many parents touched our hearts by leaving messages with encouraging messages, making me believe that we could continue,” she observed.

“But yesterday the company shut down the system and dissolved groups, as well as our WeChat accounts for work, which means we can no longer contact parents or help them verify remaining contracts and courses, or submit refund requests. I’m really at a loss now.”

MURFRESBORO, Tenn. – For the past 37 years, the Tennessee Governor’s School for the Arts, hosted by MTSU’s College of Liberal Arts, has been a tool for the education, training, and development of high school arts students across Tennessee. This year, more than 290 of these young artists will perform and showcase their talents at […]

Know if BTS V and BLACKPINK took a flight to Jeju Island? ” class=”lazy img-responsive” data-src=”https://www.iwmbuzz.com/wp-content/uploads/2022/05/bts-v-and-blackpink-jennie-caught-travelling-together- airline-staff-reveals-deetz-920×518.jpg” width=”920″ height=”518″ alt=”BTS V and BLACKPINK Jennie Caught Traveling Together: Airline Staff Reveal Deetz” /> BLACKPINK and BTS usually compete constantly to break their own records, especially now that they have achieved worldwide fame on all continents, including […]

In a September 2021 interview with AliveJohn Ross of Wild Pink described the massive sound captured on A billion little lightsreleased a month ago as the culmination of years of building something epic. “It was the last leg of this journey, of this trajectory. I definitely feel like it’s our biggest record, but I also […]