Kalgoorlie 2016: After being told by police where to look, a white man chases Aboriginal boy Elijah Doughty with a 4×4 for allegedly stealing a motorbike. The car knocks Doughty off the bike and knocks him over, killing Doughty. A Perth court acquits the driver of manslaughter, applying the lesser charge of dangerous driving. Police in full riot gear surround the Kalgoorlie courthouse and after the verdict is announced protesters clash with police armed with batons and pepper spray. This incident – and many others like it – inspired Meyne Wyatt’s excoriating play city ​​of goldcurrently on tour in Perth and Sydney following its premiere in Brisbane in 2019.

city ​​of gold only partly relates to Aboriginal deaths and the justice system. To quote the play’s protagonist Breythe Black (played by Wyatt), city ​​of gold represents: “All that broods in the pit of my stomach, rises to the surface.”

The play, directed by Shari Sebbens, begins with Breythe as the noble blackfella for a clip announcing the Australia Day lamb. The tone is reminiscent of classic Australian Aboriginal satire like the 1986 film Babakiueria in the use of grotesque caricature to paint a picture which nevertheless seems horribly realistic. Breythe is barely able to bear the ridiculous lap-lap, golliwog wig and direction instructions to stand perched on one leg holding a spear, before being called back to Kalgoorlie by his father’s death.

The first meetings at the family home between Breythe and his brother Mateo (Mathew Cooper), his sister Carina (Simone Detourbet) and his deaf cousin Cliffhanger (Ian Michael) recall the American hothouse drama by the likes of Tennessee Williams and Eugene O ‘Neil in the depiction of overloaded, overdetermined disagreements, where past and present resentments boil over. Mateo is resentful and jealous of his townsman brother, and the only way Carina knows to keep the peace is to yell at them. Cliffhanger tries to see things positively, but remains on the periphery overall.

Breythe is visited by the spirit of his father (Trevor Ryan), who roams the skeletal frame of the house (designed by Tyler Hill), projecting a heavy and slightly intimidating presence while loving to laugh. The father is lost himself, perhaps even before he returns to haunt Breythe. The mother is mentioned but never seen. The central drama is therefore masculine, revolving around the brothers, who hone and mirror each other in equal measure.

As well as ripping tapes from their counterpart and arguing over who was responsible for what, the couple embark on lengthy rants about Australian race relations, Kalgoorlie’s status as a hotbed of violence and money fueled by drugs, lack of respect for traditional law, closure of regional Indigenous communities that the government considers unsustainable “lifestyle choices”, and other topics.

Wyatt and Cooper often start facing each other in front of the veranda, before turning to face the audience. Breythe expresses his lack of enthusiasm for Mateo’s choice of country and western music, for example. When pressed, Breythe launches into a long rant about how “blackfellas all seem to like this same shitty music,” originally composed in the heart of the “Ku Klux Klan.” 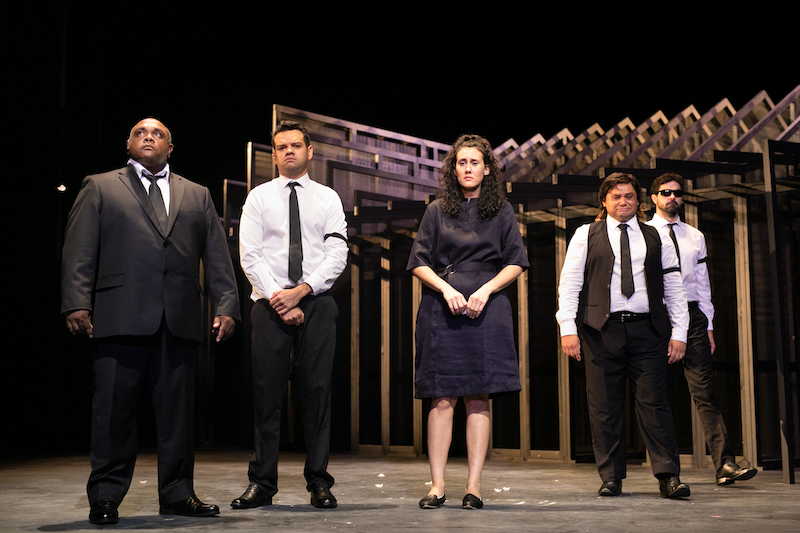 Act II begins with a particularly impressive rant from Wyatt delivered directly to the audience, in which he mocks those who suggest he might be a “coconut” – “You don’t know me!” he spits – and continues to rage at white Australians for insisting that indigenous figures must “be all Martin Luther King” and accept, rather than be “all Malcolm X” and put racists firmly at their place.

Wyatt’s speech is a verbal and gestural tour de force, akin to the proto-hip-hop jazz poetry of the Last Poets and the Watts Prophets. Wyatt combines conversational language with rhythmic lows and peaks of white-hot energy. Wyatt crouches down, swings his body, slices his arms in the air, and rolls upwards before coming back and turning around. His passion drives an extraordinary performance and it is in many ways the highlight of the production. But he and his family have more anger and injustice to express.

There is also a violent and not entirely clear second narrative development. Audiences are advised to pay particular attention to the actors’ costume changes as this is the only clue to the time cuts that take us away from Breythe’s return to focus on Mateo, now unable to contain his rage, and on the point of doing justice to his own hands. Quoting not only George Floyd, but also the deceased Australian native David Dungay, Cliffhanger tells the policeman above him that: “I can’t breathe! I can’t breathe!” This event isn’t staged until the end of the play, when it becomes clear that this is the catalyst incident for several scenes we’ve already witnessed.

This narrative sleight of hand is puzzling. Wyatt poetically connects Cliffhanger’s neck constriction to the father’s death from esophageal cancer and whose mind complains of feeling like a “shrimp stuck in his throat,” while Mateo irritates his own airways while smoking. Thus, when in the very first scene of the play, characters mention an unnamed death of Native people at the hands of the police, several victims come to mind and the play would undoubtedly read differently if viewed a second time. .

While it all sounds dark and difficult – and part of the play certainly is – there are also moments of rare beauty. In a beautiful sequence, the father gently takes over the country rock of Creedence Clearwater Revival Have you ever seen the rain? in the local Wangai language, thus contradicting Breythe’s assertion that these musical forms are inherently racist. As the lights go out on the house porch, Creedence’s Watch my backdoor plays. There is sometimes a melancholy, tense beauty and a sense of the elegiac to city ​​of gold, especially in his treatment of the father. But above all it is a raging cry against Australia’s endlessly re-enacted racial violence – and the play is all the stronger for it.

Meyne Wyatt’s play city ​​of goldco-produced by WA’s Black Swan State Theater Company and the Sydney Theater Company, and staged as part of the Perth Festival, runs at Heath Ledger Theater until March 17 and Wharf 1, Sydney from May 7-11 June.

After a successful Christmas debut last month – A Cookie Creek Christmas – the Bragg Creek-based musical theater company is launching a springtime youth drama class this spring and reintroducing its canceled 2020 production of The Wizard of Oz. A new year has arrived and the Swamp Donkey Musical Theater Society is excited to kick […]

A cast of artists from nonprofit theater company EPIC Players proves that diversity goes beyond what you can see, especially when it comes to developmental disabilities. “I’ve met so many neurodiverse and disabled people through EPIC,” performer and writer Sarah Kaufman, who was diagnosed with autism as an adult, told CBS News. “And it opened […]