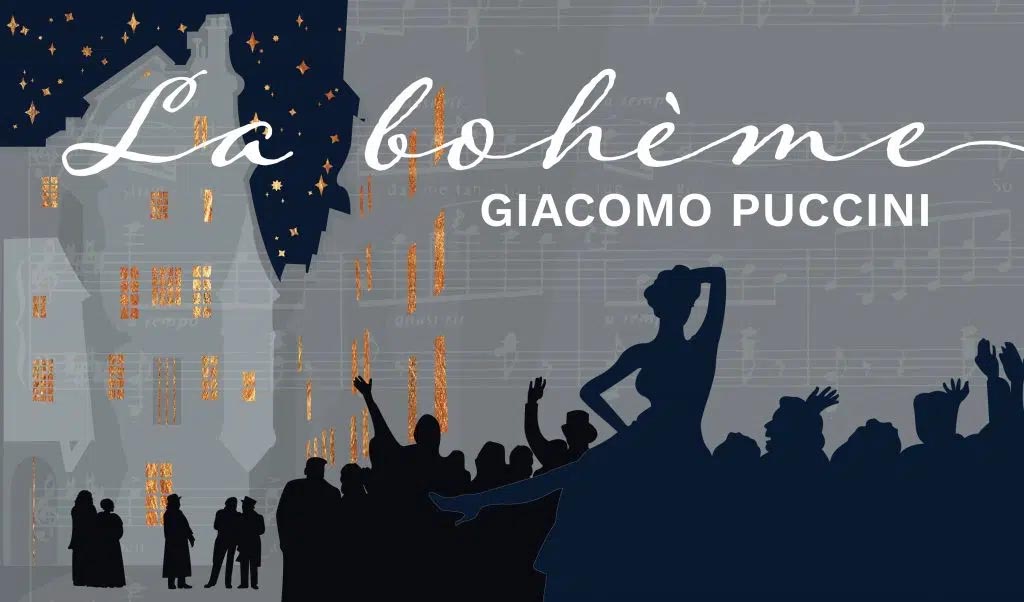 The Annapolis Opera Company announced its 2022-2023 season to celebrate its 50th anniversary. The season captures the full breadth of operatic storytelling while framing the company’s future. Founded in 1972, the Annapolis Opera Company plays a vital role in the cultural life of the state capital and surrounding counties and in advancing the careers of emerging professionals in the arts.

Bohemian: They say love is all you need, but what if love was all you had? Witness the spark of
the love that lights up the darkness in this beloved opera by Puccini. The performances feature stellar young tenor Rafael Moras, a regional finalist in the Metropolitan Opera’s National Council Auditions, who recently appeared in acclaimed mezzo-soprano Denyce Graves’ directorial debut at Minnesota Opera. Mimi is performed by expressive soprano Kara Goodrich, recent winner of the Mario Lanza Competition and district winner of the Metropolitan Opera National Council Auditions. (August 26 & 28, 2022)

Lost in the stars: Based on Alan Paton’s novel ‘Cry, the Beloved Country’, Kurt Weill’s musical tragedy set in apartheid South Africa follows the journey of loss and grief of two fathers and finds hope in the most unlikely places. Internationally acclaimed bass-baritone Carl DuPont sings the lead role of Reverend Stephen Kumalo, and soprano Ruth Acheampong, winner of the 2022 second prize at the prestigious Lotte Lenya competition, is featured in the dramatic role of Irina. (October 28 & 30, 2022)

The Marriage of Figaro: Opera Buffa at its best! Mozart’s beloved opera engages you in the overture and never lets go. Based on Beaumarchais’ groundbreaking play of the same name, Mozart’s opera is known for its outspoken treatment of class conflict and power. The theatrical and charismatic baritone, Efrain Solis, alumnus of the opera program Merola, brings the main character, Figaro, to life. Solis is joined by soprano Helen Zhibing Huang, also a finalist in the Lotte Lenya competition, who brings her immaculate coloratura to the role of Susanna. (March 17 & 19, 2023)

“We are thrilled to bring fully staged operas of this relevance and scale to our Annapolis audiences,” said AOC Artistic and Music Director Craig Kier. “The essence of our 50th anniversary is best expressed in the season’s tagline – Bravo! Bravo to our patrons, artists, friends and supporters. And kudos to the exquisite art of opera.

Annapolis Opera House: First 50 Years Exhibition: Walk through 50 years of Annapolis Opera in a free exhibit showing the evolution of the company. Hear the music, see the art, and learn about who’s on stage and who’s hiding behind the scenes. (November 10, 2022 – December 31, 2022)

Voices of our time: Join multi-genre countertenor and “The Voice” runner-up John Holiday to kick off the weekend of the 35th Annual Singing Competition. Holiday is also a Marian Anderson Award winner and a Metropolitan Opera performer who has taken the vocal world by storm! (April 15, 2023)

The 35th Annual Vocal Competition: Hear from the most talented rising stars in the classical vocal world! This free event features singers selected by a panel of renowned judges from among hundreds of outstanding applicants from across the country. (April 16, 2023)

Wondering where the comments are? We encourage you to use the share buttons below and start the conversation for yourself!

___ Inflation and wage data suggest US prices will continue to rise WASHINGTON (AP) — Inflation jumped in June and average worker wages accelerated in the spring — signs that Americans are unlikely to feel any relief from higher prices anytime soon and that the Federal Reserve will feel pressured further increase borrowing costs. An […]

The crisis casts doubt on the future of the theater troupe

THE cost of living crisis and the consequences of the pandemic could have a disastrous effect on a local theater production company. Ticket sales for Break-a-leg Productions’ next show are “significantly lower” than they need to be – and with opening night just over a fortnight away, spokesman Fraser Smith has stated that unless things […]

The company has confirmed on social media that tonight’s performance will go as planned. A statement in the caption reads: “What would we do without you? Team, Patti’s toilet and all the other unsung heroes who continue to unite to deliver the Company … ‘How could we get along to go out’.” Following on from […]